What was your first job? First job ever was at Dunkin Donuts summer before my sophomore year of high school. First job after high school was coaching gymnastics and working at a Glass manufacturing plant. First job out of college was in real estate.

What was your last job before Rx Smart Gear? I owned and operated my own private label boutique Real Estate firm.

Favorite quote? Get Busy Living or Get busy dying.

Did you play sports in HS or college? I dabbled in gymnastics whenever I could and played football and wrestled during high school. 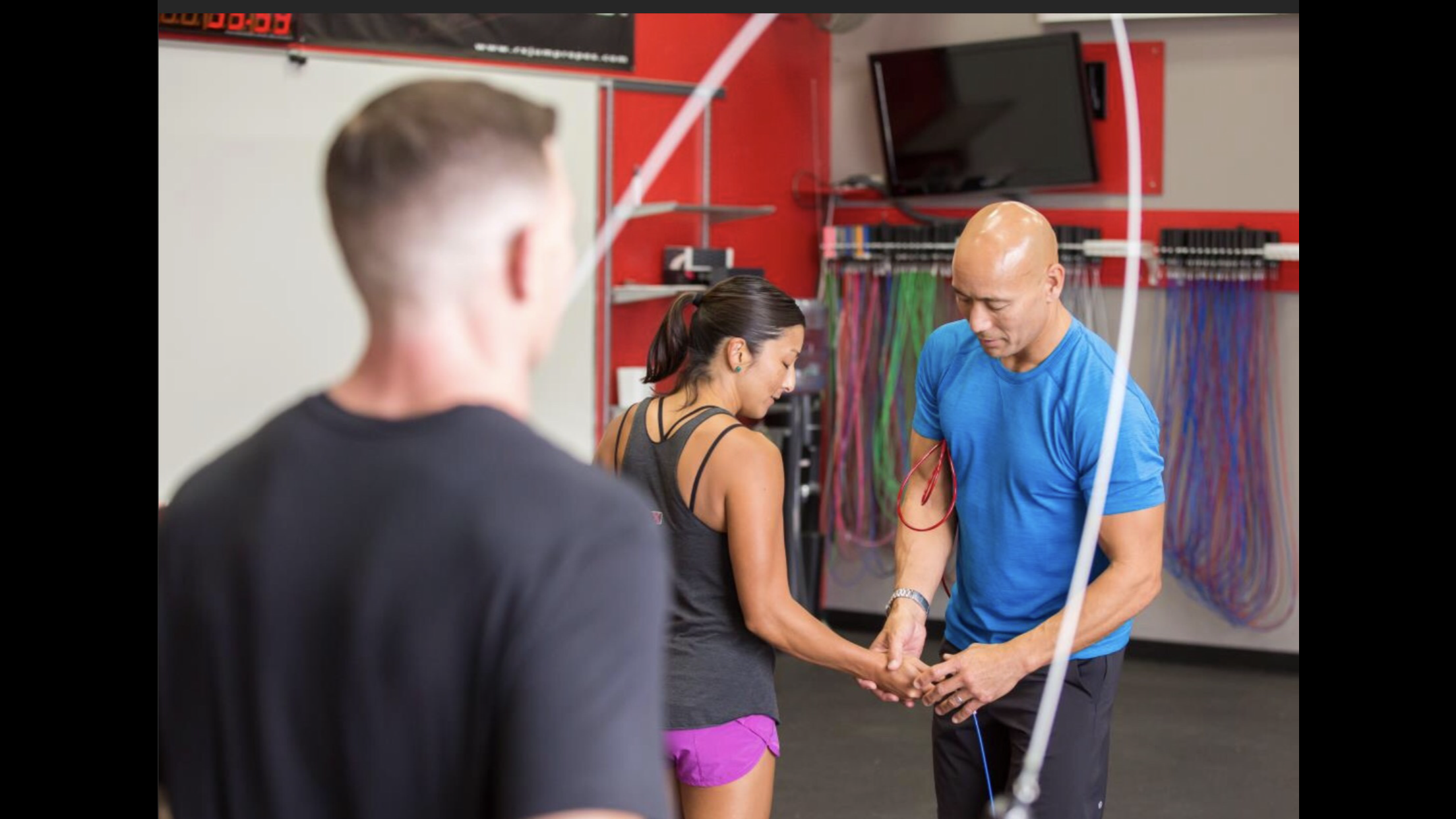 When did you start Rx Smart Gear? Officially our company was established in June 2009. Realistically, it began late 2008. I started CrossFit in May of 2008 and quickly realized double unders were a trouble spot for me.

What’s the story of how you came up with the name? I, very unoriginally, came up with the name off the top of my head. We originally gave away so many ropes to fellow gym members because I was completely humbled that I created something of value that other people wanted. It wasn’t until Joe and his wife Felica recommended creating a Facebook page and advertising them to the public that we realized we needed a name. At that time there were maybe one or two companies that were using the Rx theme. We figured that since every one of our jump ropes was custom made to fit each individual that we were essentially prescribing a jump rope for someone. So we started off as Rx Jump Ropes. After we got some traction in the market place we decided to bring some of my other creations to market. Things like my canvas shin guards and muscle up grips and muscle up rings. I thought it was weird to sell other products under the umbrella of a jump rope company so we rebranded to Rx Smart Gear. The idea was that our products are simply smart and effective. We eventually evolved to RXSG Fitness Co. just for ease of branding and aesthetics.

Why did you start it? I started tinkering with jump rope designs to solve my own issues of inconsistency in learning double unders. I tried every jump rope on the market at the time and could not increase my consistency. So, I started blending the best of each rope that I liked to solve each deficiency I identified during my exploration and discovery of the movement.

Where did you get the idea? The idea to build jump ropes was just a garage hobby to solve my own inconsistency in learning double unders. There was never an intention that this was going to become a commercial venture. The growth of the CrossFit market actually dragged us “willingly” and aggressively into the commercial world.

How many people are on staff? We typically hover at around 20 employees. My wife and I run the company. And we have a handful of independent contractors that help teach our jump rope workshops around the world.

Where’d you get the money to start Rx Smart Gear? We were self funded initially. But I borrowed $1000 bucks from my parents to place my first large production order of raw materials. We ran the company out of our house for 2.5 years until we saved up enough reserve money to cover all overhead for over 1 year. We had 10 employees coming into my home every day at that time. We converted half the house to handle customer service, packaging, manufacturing and shipping. I owe my wife a lot of kudos for putting up with us during those couple of years. She was working full time at San Diego State University and would come home to a disaster every night. But everything seems to have worked out alright. 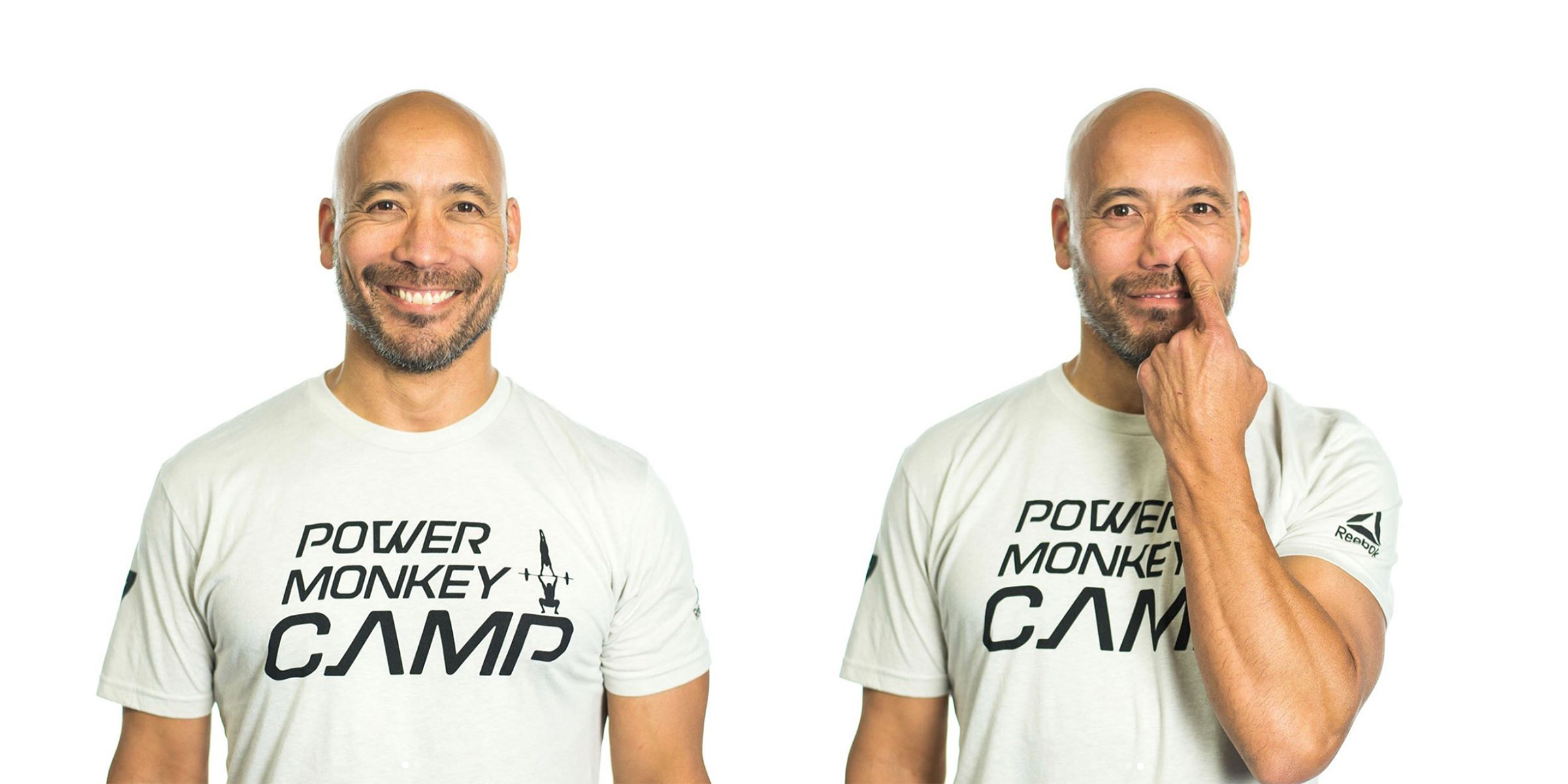 On Being a CEO

Describe your first year in business in five words: Like Riding a Brahma Bull.

Describe one relationship you developed early on that changed Rx Smart Gear: Joe Craig has been my workout partner for the last 10 years. While other gym members were kidding me in a lighthearted way for making jump ropes in my garage, Joe and I were testing out my creations and working to improve them. Joe and I were invited to sell our ropes out of the Rogue Booth in Carson at the 2010 CrossFit Games. We weren’t sure what we were doing but we showed up and let people demo the ropes. We’d coach them and help them into the right size rope during the day. Then we’d build all of the custom orders in our hotel each night. People went crazy for them and we sold out. That was a nice catalyst to jump start the business. Joe still had a few years left of his military obligation but once he finished that he came onboard full time with the company. He now holds a vital role in company direction, managing staff as well as handling all outside promotions, events and athlete sponsorships.

What’s one boundary or personal rule you set early in your career that you still follow? I try to never use credit personally or professionally. My wife made me get a company credit card just so we can accumulate sky miles. We pay it off weekly.

What’s one piece of advice to aspiring entrepreneurs? Be creative and be original. The marketplace is already jam packed with retreads of other people’s original ideas and hard work. Create something that you feel deep in your heart will bring value to people. Our goal was never to make money selling jump ropes. Our goal was a passion project to build the best jump rope to help us improve our own double under skills. Once we accomplished that and let other people try our creation they saw the immediate improvement in their own skills. For me, having the laser focus to create something that worked really well trumped all other factors that usually come into play when creating a product such as cost to manufacture, aesthetics, packaging, marketing strategy etc. None of that mattered. All that mattered was that our creation did the job we needed it to. That’s when we knew we had something. We worried about all the other stuff later and everything worked out.

What challenges keep you up at night? Usually how to improve our existing products or create new ones. I don’t ever want to rest on the success of my previous creation nor do I want to put something out on the market that doesn’t bring true value to our customers. So I see product ideas or tweaks to existing products in my head while laying in bed. But that kind of relaxing for me. My fear is forgetting a good idea by morning time. For the most part I sleep really well.

What’s your biggest self doubt or fear as a CEO/Founder? The biggest fear is always staying on top of the latest trends. This new world of social media, Amazon and Alibaba has created this weird vacuum where new stuff is popping up constantly that is fast and cheap to obtain so the risk to experiment is very low. This seems to be creating a mentality of disposable products. It’s hard to create long term loyal customers that way. So our goal is to appeal to the higher end user who appreciates quality. So we’re always striving to attract new customers but keep doing the things that keep our old customers coming back.

What’s the scariest purchase or investment you ever made as the CEO? I’ve written six figure checks for company purchases but I can’t say that any of them were scary. We’re pretty calculated with spending and never carry any debt other than typical operating expenses. You always hope the investment pays off but we’re just happy that we have the opportunity to explore those options.

What’s one interview question or test that you give to new hires? I don’t do a lot of our hiring anymore but we do try and hire based on character and train the skill sets needed. If I get a chance to meet with a prospective hire I like to look for genuineness and relaxed confidence. We’re a small company so it’s important that everybody can work cohesively with one another.

What’s the biggest myth out there that you see in your industry? The biggest myth in the functional fitness world is that double unders are difficult learn. They’re actually very simple. But most people do not treat it the same as other skills you learn in the gym such as an olympic lift or a gymnastic movement. Most people make the leap from single unders straight to double unders and are only focused on task completion rather than skill building. That’s like warming up your snatch with a pvc pipe and then immediately going for your max snatch. That’s not a healthy nor effective way to learn a new skill. We’ve taught just about every shape, size and athletic ability how to do a double under. It just takes an organized approach and knowing what to focus on each time you have a rope in your hands. I should know, I’m not only the President I was the first student. Haha. That was a 'Hair Club for Men' joke.

If this all blew up tomorrow, what would you go do? I try and surf every weekend with my sons and buddies. I have a few products I created for the surf and beach lifestyle. I’d start a new company and bring those to market.